“For any facial area treated with Botox®, a number of variables, including specific aesthetic goals which are determined by the patient’s personal desires, influence the placement and number of injections. The distinction between wrinkle effacement and facial shaping is critical, as both or either may be achieved. The end result, should suite and enhance the patient, from those that work in media, or on stage and therefore require certain facial movements, to those who wish very little facial movement, or anywhere in between.” Dr Alek Nikolic

Since the approval of BOTOX® Cosmetic by the U.S. Food and Drug Administration in 2002, Allergan has virtually changed the face of medical aesthetics. Men and women between the ages of 18 to 65 now have the ability to choose science-based, non-invasive medical aesthetic solutions, including BOTOX® Cosmetic and the JUVÉDERM™ family of dermal fillers, to achieve their own natural results. Since its approval, BOTOX® Cosmetic has been the number-one physician-administered aesthetic procedure in the United States.

BOTOX® Cosmetic is a simple, non-surgical procedure for temporarily smoothing moderate to severe glabellar lines - the vertical frown lines between the eyebrows that look like an "11" - in adult women and men aged 18 to 65. BOTOX® Cosmetic relaxes the dominant facial muscles that cause the "11s" to form by blocking nerve impulses that trigger wrinkle-causing muscle contractions, creating a smoothed and improved appearance between the brows. Results can last up to four months and may vary with each patient.

Serious heart problems and serious allergic reactions have been reported rarely in BOTOX® Cosmetic treatment. If you think you're having an allergic reaction or other unusual symptoms, such as difficulty swallowing, speaking or breathing, call your doctor immediately.

The most common side effects following injection include temporary eyelid droop and nausea. Localized pain, infection, inflammation, tenderness, swelling, redness, and/or bleeding/bruising may be associated with the injection. Patients with certain neuromuscular disorders such as ALS, myasthenia gravis, or Lambert-Eaton syndrome may be at increased risk of serious side effects. BOTOX® Cosmetic is administered by physicians and is available only by prescription.

BOTOX® (Botulinum Toxin Type A) is a simple, minimally invasive treatment that may deliver effective results to a wide range of patients suffering from certain neurological disorders. BOTOX® is a purified protein derived from the bacterium Clostridium botulinum. Type A and is one of the seven distinct antigenic botulinum toxins produced by different strains of the bacterium. BOTOX® decreases muscle activity by blocking overactive nerve impulses that trigger excessive muscle contractions or glandular activities and is administered in a few injections directly into the affected area.

BOTOX® for Therapeutic Use

Allergan’s BOTOX® is an important versatile medicine with more than 18 years of successful clinical experience in certain therapeutic applications. In the United States, BOTOX® neurotoxin therapy was granted approval in 1989 by the U.S. Food and Drug Administration (FDA) for the treatment of strabismus (crossed eyes) and blepharospasm (uncontrollable eye blinking) associated with dystonia, including benign essential blepharospasm or VII nerve disorders in patients 12 years of age and above. BOTOX® has since received U.S. FDA approval in December 2000 for the treatment of cervical dystonia in adults to decrease the severity of abnormal head position and neck pain associated with cervical dystonia. More recently, in July 2004, BOTOX® neurotoxin was granted U.S. FDA approval for the treatment of severe primary axillary hyperhidrosis (excessive underarm sweating) that is inadequately managed with topical agents. In the United States, BOTOX® is currently being investigated for the treatment of additional medical conditions, including headache/migraine, post-stroke spasticity, and overactive bladder.Around the world, BOTOX® has been approved in more than 75 countries for 20 different indications treating many patients who suffer from certain neurological disorders.

BOTOX® Cosmetic (Botulinum Toxin Type A) for Aesthetic Use

With dosing specific to treat frown lines between the brows, the same product is now marketed as BOTOX® Cosmetic in the United States and Canada, as VISTABEL® in France, Spain, Switzerland and many other European countries, and as VISTABEX® in Italy. In 2002, BOTOX® Cosmetic was approved by the U.S. FDA for the temporary improvement in the appearance of moderate to severe glabellar lines (the vertical “frown lines” between the eyebrows) in adult women and men ages 18 to 65. The glabellar lines, which often look like the number “11,” can have a negative effect on one’s overall facial appearance by creating a sad, angry, or tired impression. When administered for this use, BOTOX® Cosmetic creates a temporary smoothed and improved appearance of the wrinkle-causing muscles between the brows. 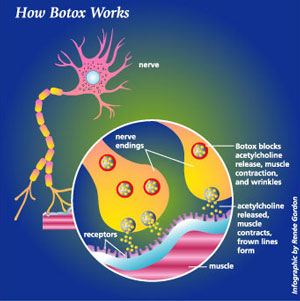 BOTOX® neurotoxin blocks overactive nerve impulses that cause excessive muscle contractions or glandular activity by selectively preventing the release of the neurotransmitter acetylcholine at the neuromuscular junction and temporarily inhibiting the targeted muscle or gland activity. BOTOX® is administered in small therapeutic doses by intramuscular or intradermal injection directly into the affected area, depending on the indication, producing a typically reversible decrease of muscle or gland activity. The therapeutic effect of BOTOX® is temporary and lasts from approximately one to six months, depending on the individual patient and indication. Over time the nerve inhibition produced by BOTOX® neurotoxin is reversed as nerve endings recover and begin to release acetylcholine again, at which time another injection of BOTOX® may be needed to maintain therapeutic effect. BOTOX® therapy should only be administered by a trained and qualified medical physician only.